We spent a day in Portland at Next Adventure, Alder Creek, and PKC gathering a few more supplies. Two nights in Seattle at a friend’s house (thank you Hynes-Hoffmanns!!) gave us a day to use some REI gift cards, and pick up a vest at Feathered Friends next door. Now that we are on San Juan Island our departure date has finally sunk in and we’re looking forward to the paddle north that we’ve been talking about for the past two years! Having been completely absorbed in my final semester of school, Brooke has shouldered much more of the planning and preparation work of this expedition. We considered waiting until next summer…but decided in the end neither one of us felt like waiting another year.
This morning we drove out to Reuben Tarte Park and spent several hours enjoying being back in our boats again (it was Brooke’s first time in her new Explorer). We practiced a few rolls, which admittedly neither one of us was interested in trying first off given the water temperature. But after a considerable amount of making fun of eachother and laughing at how sacrilegious it would be for us to take out without rolling at least once we got over it with no trouble. The next few days will be dedicated to last-minute purchases, waiting for our escort crew to arrive (my mom and my aunt will be joining us from San Juan Island to Nanaimo), and desperate attempts to enjoy and appreciate things like beds, roofs, climate control, other people, and a variety of food. 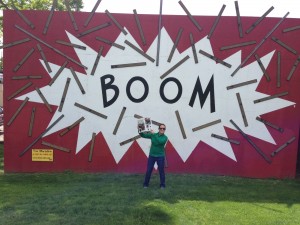 Brooke got to carry around the bear box all over Seattle. 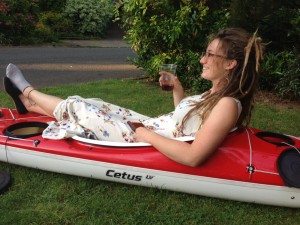 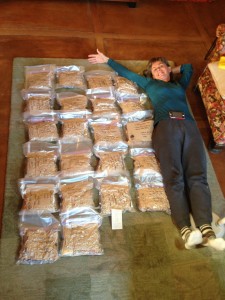 Eileen helped out A LOT with the food prep and planning. We used the “Excalibur” dehydrator to prep 73 meals

Brooke’s new boat at the container ship mecca in Seattle