It’s been 10 days since we left Shearwater and it was a long stretch up indescribable channels of fiords, rivers and waterfall after waterfall! We decided to head up the Mathesion Channel instead of the more heavily traveled Finalyson Channel because we wanted to avoid boat traffic and we just heard it was more beautiful and oh man was it ever! The forecast called for sunny skies the next 4 days and it almost seemed tropical in northern B.C. One of our first stops before paddling into fiord land was a native built cabin on lady Douglas island. It was in awesome shape and it meant we didn’t have to hang our food from bears. The next day we made our way into Mathesion Channel with amazing fiords running down both sides. Unfortunately the huge waterfalls were on the east side but we could hear their roars and see a little bit of the water running down the mountain. In a motor boat it would be easy to check out all the inlets and waterfalls but traveling at 3 knots it would take most of our day just to see one area. Next it was up through the Meyers Narrows and into Sheep Passage. We hit strong winds and current against us here, but made it to Carter Bay on the mainland side. We were told to be wary of grizzles here plus we were camped next to a big river and lots of berries! We set off our newly received bear banger to test it out and celebrate the 4th of July. This place ended up being ridiculously buggy! We had to walk around while we ate dinner and ate breakfast the next morning in the tent! No amount of bug spray or even dryer sheets help with noseeums! It’s brutal and they love me more than Kelly haha! Butedale was next and it was a treat! It used to be a cannery that started in 1909, but now most of the buildings and docks have fallen down or been burned down. There is a caretaker, Lou, who has lived there 12 years and charges small moorage fees to boaters to dock and resupply water and even shower! Plenty of fresh water there from a giant waterfall. He uses the water to light his house and run electronics! Met an awesome family there from Tampa, Florida on their boat, Catchin’ Moments. Had an amazing dinner with Greg, Susan, Presley, Garren, and Captain Tim! Thanks again guys for everything

Next campsite was awesome because Kelly caught a coho in the Frazer Reach after only 10 minutes of trolling so we had our first experience of catching our own dinner. It wasn’t an easy paddle after the catch because it was crazy windy, but we eventually made it to Kingcome point on the north side of Princess Royal Island. We also saw a wolf at this site. Just sitting there having the usual oatmeal on a log for breakfast when I looked up and saw the wolf walking by. I whispered to Kelly to look up. He stopped and we all just stared each other down! Eventually he just kept walking. Definitely a cool experience! Hartley Bay was the next stop. We were told there was a store for resupplying but there was not! We were able however to set up the tent under a pavilion thank goodness since it was rainy and cold. Turned out a store wasn’t needed because we met several generous fisherman who shared smoked salmon, bread, and canned goods with us. Finally it was time to enter the Grenville Channel which we were dreading a bit because it has strong currents and is over 40 miles long. Oh boy it did end up causing us some trouble haha. First day started off great but ended in misery. We were told there was a cabin in Lowe Inlet which is about 3 miles deep and we decided why not because it was rainy. We spent 2 hours in there circling and crossing the inlet in the pouring rain and found nothing. Not even a spot for a tent. The boats anchored in there probably thought we were nuts paddling around. So we paddled 3 miles back out and ended up on a rocky ledge 2 miles or so down. Terrible spot for unloading and loading boats but it was getting dark and we just wanted out of our boats!! Grenville channel was one of those places that was amazing and terrible at the same time. I think we passed 25 waterfalls through there but it was windy and we were always against the current. We just wanted OUT! Finally 2 days after the Lowe inlet incident and 2 more rocky ledge campsites we made it to Prince Rupert for some much needed rest and relaxation. Going to spend 3 nights here at the Pioneer Backpackers Inn and then head out for Ketchikan on Wednesday! Can’t believe we are only 26 miles from U.S. border. We are more than halfway finished. Pretty exciting 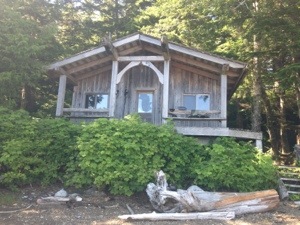 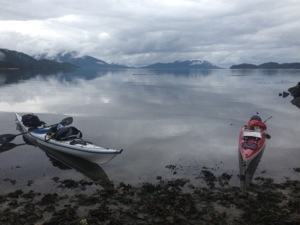 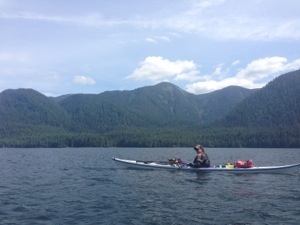 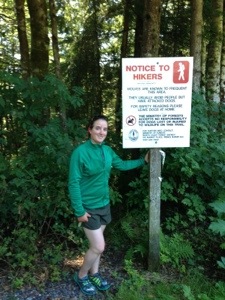 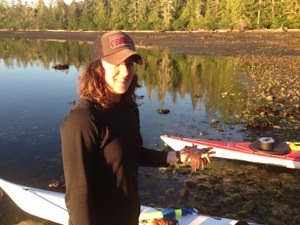 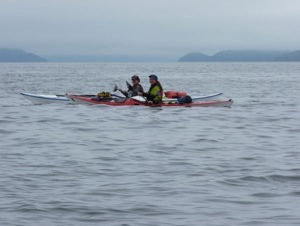 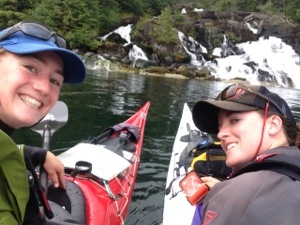