We arrived in Port Hardy yesterday afternoon after 24 days and checked in at the Scotia Bay Rv Resort! We have put in a lot of mileage since leaving Powell River. Made a quick stop in Lund at Nancy’s Bakery after a sailor recommended it. Definitely worth it. First blackberry cinnamon bun we have ever had and it was ridiculously good! Our next big obstacles were the array of rapids we had to hit over the next few days. The Yuculta, Dent, and Green rapids can have currents over 10 knots, whirlpools (one called Devils Hole), and over falls but are safe to travel if you go through at slack which we managed to do at all of them, woo! After the Yuculta rapids we stopped in Big Bay on Stuart Island and met a wonderful couple, Joanne and Dave who invited us up on their boat, L’Esprit, for dinner and drinks. The lentil soup was awesome and we really enjoyed the COLD fresh apples

Next we made our way up the Cordero channel where we stopped at the Cordero Lodge. The plan was just to stop there for a cold beverage, but we ended up camping on their helicopter pad at the end of the docks! The owner, Laury, and caretaker Jefferey invited us to stay around to eat fresh crab and oysters! It was a blast hanging out with those guys and their friends. They even gave us a dozen fresh oysters and another small fishing pole on our way out. The weather took a bit of a turn at this point. It rained a good bit off and on and the wind picks up a bit in the afternoon on the Johnstone Strait. We did have our first bear sighting!! He caused us to have a very long paddle day. We pulled up on the beach to camp and while searching for a good tent spot l hear Kelly say “theres a bear”! Totally freaked me out at first because i imagined it standing behind me but it was at least 200 yds away and he could have cared less about us but we left of course. Ended up paddling 22 Miles that day to the Broken Islands and decided to have a rest day the next day! The rest day was nice! Decided to explore the island and we totally have Bearanioa so we put on our bear bells and set off into the woods. Not too far in the forest after seeing these ginormous tree stumps, Kelly spots all these old animal bones in this cave looking spot so we hightailed it out of the woods and back to the beach. It’s amazing (especially at night) how every sound is a bear! Definitely a Bear, haha. The best part of this last stretch has been the beautiful scenery of the Desolation Sounds and the amazing and generous folks we have met along the way! Headed out for Bella Bella tomorrow morning! 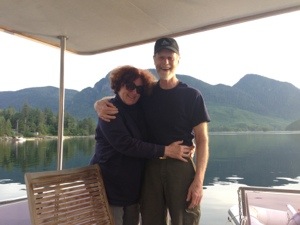 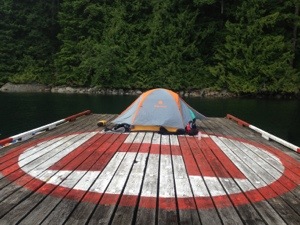 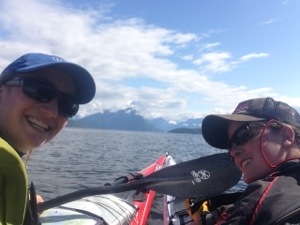